Barley and coffee-magical spirits of people and place

I just finished watching Caffeinated, the story of people behind the mighty coffee bean. Originating in a thin tropical band at just the right altitude around the globe, the end-product of the bean ends up as espresso, americano, drip, pour-over, lattes, and more. As I sat listening to the stories of farmers in Nicaragua, Ethiopia, India and beyond, told through translators and purveyors of fine coffees in US, Italy and elsewhere, I couldn’t resist drawing parallels to my other favorite spirit – Whisky. 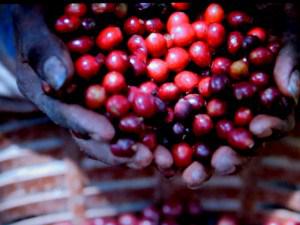 Coffee grows as a berry, and looks suspiciously like a cranberry on those plants. The bright red shell protects the sugars and bean contained within, clustered in various stages of ripeness. When separated by color, size, shape, and smell, the beans are extracted, allowed to ferment for 27-32 hours, washed, dried on concrete surfaces, and packed away for shipment. Arriving at culinary centers around the world, the coffee bean (white, in color) is roasted for a perfect aroma, sheen, and readiness for grind. What ends up in our cup is a marvelous drink – sweet on its own, intoxicating in its own way, and communal in spirit. Additions like milk and flavors address the palate in fruity, woody, and body.
Barley seeds are immersed in water to allow them to open and release their sugars. Dried on concrete floors for 48 to 72 hours, some are infused with smoke from peat for their own aroma. Yeast converts the sugar to alcohol, ready for a drink. Allowed to relax patiently in wood, the spirit adopts the flavors of the casks. Enjoyed in communal celebrations, the spirit is enjoyed globally. So much like coffee.
The thing that struck me in the movie was how the farmers are resistant to change. A coffee plant may reach production ability in about four years – an eternity of risk before rewards are available. The story no different in whisky producing regions that religiously protect everything from the malting process and the shape (including dents) of the still to maintain uniformity. Unlike coffee, whisky has an even longer patience test – often lasting seven or more years.
If you subscribe to Amazon Prime, movies about both drinks are available as Caffeinated and Whisky.
Ancient processes to produce drinks that mark the beginning and end to a perfect day. 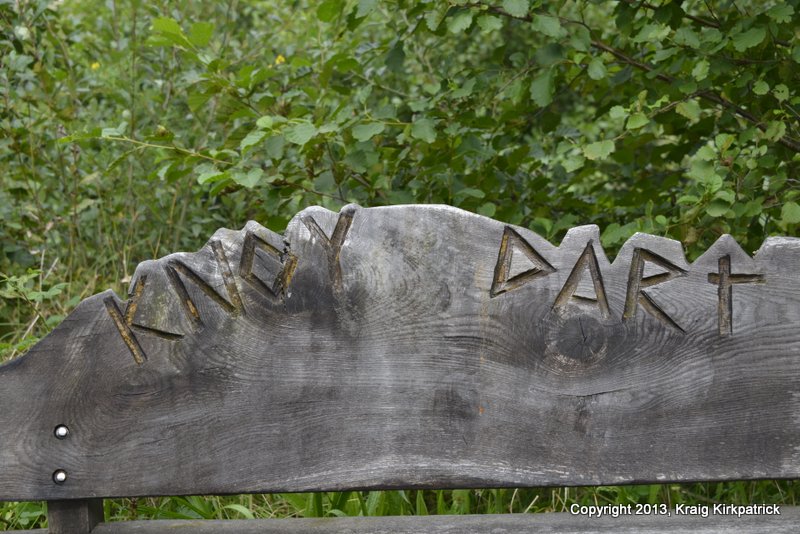 Unique tourist locations, sometimes disguised as tourist traps, can sometimes expose one to special places.  I had one such experience during a Whisky exploration trip to Scotland. As a part of our week-long trip across the country, we dedicated a day for a trip to the remotest pub in UK, the Old Forge, located in the tiny town of Knoydart. The town is accessible by walking across 18 miles of Munroes, Corbetts and Glens. Though scaling these peaks and valleys would earn us the real right to enjoy a pint at the old Forge, we took the easy way. 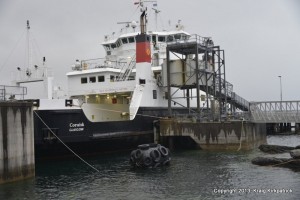 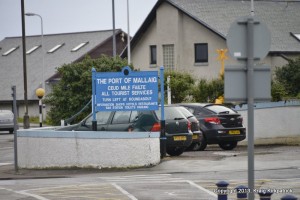 The easy way entailed taking the early morning Armadale ferry (~7:30am) from the Isle of Skye to the port of Mallaig. Visitors on the mainland can drive to Mallaig just the same, but since we happened to be on Skye and private boats weren’t available, we accomplished the trip with two short ferry transports. The ferry ride itself was very comfortable, representative of other Caledonian Macbrayne ferries. It dropped us off at Mallaig in time to grab a quick coffee and buy our tickets to Knoydart. 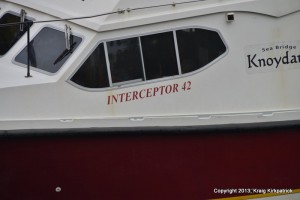 Though there are two ferries from Mallaig to Knoydart, we chose the more frequent Seabridge ferry purely to fit into our schedule. Both the Knoydart ferry and the Seabridge leave from the same dock and the boats, are nice and comfortable for the short 20 minute ride. The boat ride was a sheer pleasure and we spent the ride chatting up Tom, our captain and a bloke of but 19-years old. We learned about many local fables and legends and were both surprised to have him know where Iowa was and embarrassed by his admonition of us – “why I saw it in the Atlas, of course!“. 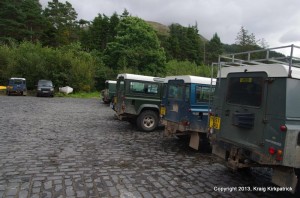 The first realization that hits you about Knoydart is its tiny size. The small size is further dwarfed by the terrain nearby. The row of Range Rovers at the dock were a clear indication of the remoteness of the town.  The village is tiny, of population 120 during the off-season and *everything* including the seafood we were about to consume comes off the ferries. There are some vegetables are grown locally and venison the primary meat served in winters from hunting expeditions . The area is stunning beautiful with amazing peaks in several directions and the sea in the remaining. We arrived there by 10:30am and the Old Forge was to open in a half-hour or so and we chose to explore the area a bit. 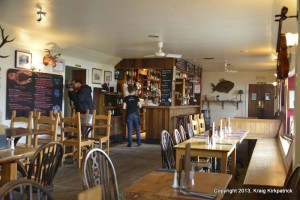 Other than knowing that the Old Forge was a music and seafood haven from its website, I didn’t try to prepare 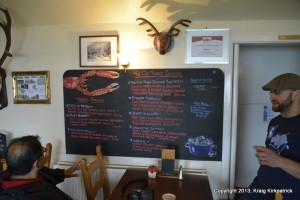 myself much. I’d stayed away from photographs of the pub and desired to be surprised. Entering the pub, we found a very well-maintained, nicely appointed pub that appeared to be more of a restaurant than a bar. The bar itself was small with clean surroundings and tables. The menu was handwritten on a chalk-board and promised some seafood delicacies. Click the photograph of the menu to see it in detail. Having visited several seaside pubs and tourist traps in the US, I figured the food would be relatively common, even bland. Was I about to be proven wrong. 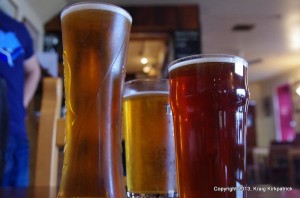 We ordered a pint each, a seafood platter and a couple of other courses for the meals. As we enjoyed our beers and food, several other patrons filtered in, hikers, families, children, couples from all around the world. 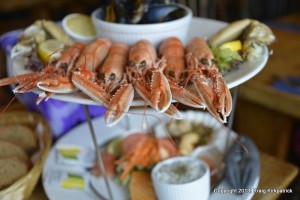 The accents and languages were global and the Old Forge quickly proved itself to be everything a tourist trap isn’t – a sight to enjoy, great food, good beers, a part of Scotland seen by few, and a little treasure that must become stunningly beautiful, albeit a bit lonely in the winters. A loner’s paradise, I’m certain.
The ferry ride back to Mallaig was fun and we grabbed another Americano and Espresso before catching the Armadale ferry back to Skye. A stunning, Michelin star dinner would await us at the B&B that night. That story, another day…. 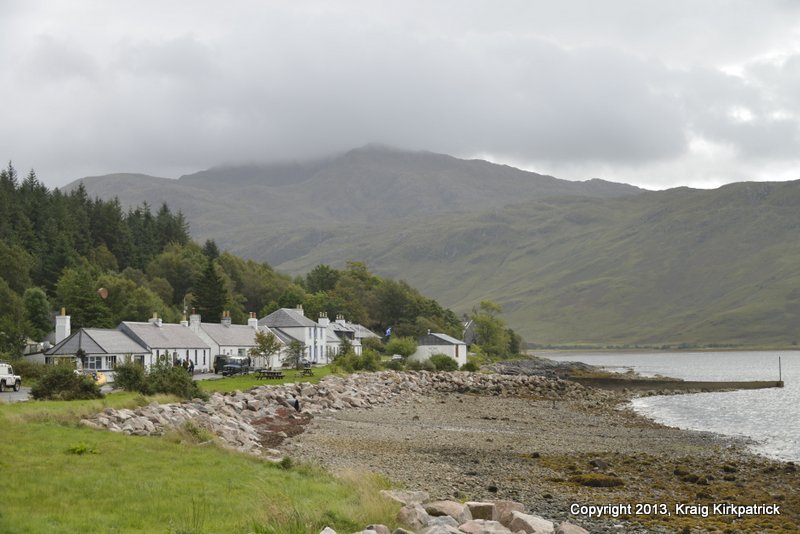 Planning a trip to Islay

Islay, or the Queen of the Hebredes, is a magical little island for many reasons. Known worldwide as the source of such peaty malt whiskys as Laphroaig and Lagavulin, Islay history reaches far deeper and broader. It is not an island all about whisky, and even for the staunch whisky enthusiast, it offers opportunities for an amazing vacation.
I first visited Scotland in May 2012 primarily to visit the distilleries of Laphroaig and Lagavulin on Islay. After spending the 90s drinking the “Indian” favorites of Johnnie Walker, Glenlivet, and Chivas, adding Dalmore, Balmore, and Glenrothes, I’d been introduced to the intense taste of Lagavulin by my friend Kraig in early 2000s, and finally I’d found a way to get to Islay. The resulting experience driving around parts of Scotland and the few days on Islay had been so beautiful that I found myself wishing to return to the island.  Kraig and I talked about it often and finalized plans to truly (and fully) explore the malts of Islay.
Kraig and I were joined by a colleague in conversation, Andrew Kirpalani, in the early part of 2013. As is typical of such group vacations, several others exhibted interest but waned during the year.  Kraig and I persevered and outlined an itinerary on a Google Map.  We began with a rudimentary travel schedule that would take us from Glasgow to Speyside distilleries, then the highlands, over to Skye and finally down to Islay. We consciously decided to forgo Campbelltown.
Not much happened over the summer but in early August we finalized plans to fly to Scotland for the week of September 14th. We quickly found a connection from Des Moines to Glasgow via Philadelphia and booked it. Finding lodging was going to be a different challenge; one that would make us change our driving schedule to take us from Glasgow to Speyside, then the Highlands, down to Islay and back up to Skye before returning to Glasgow.
We are lovers of Islay malts so we knew that the island would be our core destination. That meant that we’d need to plan our vacation around three key items – B&B on Islay, ferry availability from Kennecraig to Islay, and availability of the Water to Whisky tour at Laphroaig. I’d done that tour in 2012 and learnt so much about the process and Laphroaig that I wanted to repeat the trip with my compatriots. Islay is a small island with a handful of hotels and quite a variety of bed and breakfasts that cater to the large number of tourists April to September.   Unlike the US, Islay and much of rural Scotland is devoid of large hotels.  In my first trip, we’d easily found Richard and Hilary’s Coultorsay B&B but this time around the beds were much harder to locate. After dozens of emails and phone calls, we landed upon Kilmeny House B&B in the middle of the travel week that necessitated the jigsaw travel scheduled mentioned earlier. I’d emailed Laphroaig for reservations and had seen sufficient availability on the ferry earlier, so wasn’t worried much given that we were traveling in low season.
A typical trip to Islay will originate from Glasgow, with the three-hour, 100-mile drive snaking its way up A82 and then down A83 until you hit the town of Tarbert for a meal/drink before embarking on a 10 minute drive to Port Kennacraig for the ferry. The ferry is a two hour leisurely journey on a well-appointed vessel, complete with a snack bar and comfortable lounges.  You’ll disembark at Port Askaig (near Caol Ila or Bunnhabhein) or at Port Ellen (near Lagavulin, Laphroaig, and Ardbeg). Finding your way to the B&B or hotels will be a 0-30 minute drive, tops, except for the naturally occuring stops you’ll cause for yourself to take in the awesome sights.
For anyone traveling to Islay, especially in late May or September, I’d recommend starting early – very early as the Islay Festival of Malt and Music (Feis Ile) in late May and the Jazz festival in mid September can exhaust lodging options very quickly.  I will be writing about this entire trip in more detail, dedicating a post to each location and linking/updating this post with the individual locations/attractions. Until then, please note that Scotland is a unique place for tourism – untouched for the most part and small, and you must plan your trip around the key sites you want to guarantee.
I’ll leave you with one of my favorite images from Scotland – from Islay, of course.