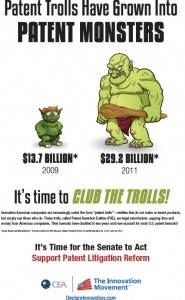 I just wrapped up a very full day meeting in Washington with several Senators and their staff on the issues surrounding patent reform.  This day was coordinated by the Application Developers Alliance, an advocacy group I connected with in December around the time of the House vote on the Innovation Act (House Bill 3309).
Before I go further, political correctness stalwarts as well as trolls themselves are calling for the name trolls be dropped and Patent Assertion Entities (PAEs) be used instead. I will use the term troll instead… it is not only the industry standard name, it also labels these entities accurately.
Imagine receiving a letter like –

Dear CEO – you owe us $1000 per employee at your company for each networked scanner that emails scanned documents and one or more of your employees potentially uses that feature.
or
Dear Kevin – we noticed that when you picked up groceries for your mom and sister during your recent shopping trip, and delivered them on your way home, you violated our patent on efficient routing for purposes of grocery delivery between retailer and one or more consumers. You owe us $1200 per delivery point for this violation.

Does either sound ridiculous? Yet, one is real and the other… well… the other could become real.  In the case of the former ‘letter’, a trolling entity has divided the US into territories where patent attorneys are actively sending demand letters to businesses using scanner to email function. Each letter demands the $1000 compensation. It has ticked off enough complaints and confusion in the business world that state attorneys generals have been called into action.
In a remarkable move, 42 Attorneys General have urged Congress to take action and to provide the Attorneys General to utilize the powers granted to them in assisting the citizens in their states and territories. This letter generated significant buzz during our visit and was largely being seen as a positive action toward patent reform.
Fast forward back to today – and what brought me here to DC. Meetings today covered members of the press, a dozen senators, a number of legislative staffers from senators’ offices, and two representatives from national VC firms – Brad Burnham of Union Square Ventures and Jason Mendelson of the Foundry Group.
Trolls aren’t a headache JUST for large technology firms. They are beginning to affect everyday businesses through measures that can best be described as extortion. Send vague letters to businesses large and small claiming that the business is infringing on a patent. Given them a short window to respond with payment or the penalty will go up. If the business chooses to litigate, the ‘fines’ will go higher and potentially private and personal information extracted through discovery of the company’s systems, mobile devices, phones, etc. This is a national problem that affects all of us and household names in my own state – Kum & Go, Bettrlife, Kinze Manufacturing,Iowa Bankers Association, HyVee and more have gone on record documenting their problems with trolls.
It was good to have two very large VC firms and a relatively small angel group represented in DC by our group of three. As Iowans we have an unusually significant sway – whether it is in the first in nation status in the caucuses to having two very senior senators who are respected universally. Senator Grassley’s position as a ranking member of the Judiciary committee makes him particularly powerful in this realm. Those who have read this know that I’ve spoken with him and his staff in the past about immigration issues and found him receptive – even though party politics (and the 2012) election rocked that boat past his control.
Patent reform has taken the form of a 325-91 support in approving the House bill (H.R. 3309) in December 2013.  The bill, also called the Innovation Act, immediately received support from the White House . The companion Senate bill (S.1720) was introduced in December and is currently being studied by the Judiciary committee while other bills make their way around the Senate. Our direct request today was for the Senate to move forward toward passage of patent reform in the senate that can pave the way to conference that will resolve the difference between the House and Senate bills before the President can sign it into law.
The key provisions we asked for are –

I reached out to several attorneys in Des Moines who are know for their work in intellectual property, including patents.  Several who represent small, innovation focused companies, warn of a chill that could befall such small companies due to the need for paying winner’s attorney’s fees, as they fear that large companies could simply bury the small company under legal costs. Similarly, members of the software community who have business process patents are naturally against provisions that could expand a review of a previously issued patent. I feel that the innovation community is at a greater risk of being attacked by trolls who are using old patents from now defunct companies. These patents, issued in huge quantities after their 1996 allowance, and bought up during the dot-com crash, now are utilized by entities that exist solely to litigate.
Though we haven’t seen this in the Iowa investment community, Jason and Brad both talked at length about how the companies they see closely tend to come into the trolls sights right about the time they receive serious funding or exhibit commercial viability and success. Companies are actively being formed to go acquire patents from companies in bankruptcy for the sole purpose of litigating with that portfolio.
The meetings at Senators’ offices proved very detailed. There was hardly any fluff in the 20-30 minutes we had with each senator, and the Senators and staff did an equal amount of talking and asking. Since we didn’t need to push an agenda with senators  who are already on board with patent reform, we offered help and the meetings entered meaningful discussion about ideas, alternatives, and potential solutions. Today, there are the Leahy-Lee (S 1720) and Cornyn-Grassley (S 1013) bills that represent the Senate position and the underlying conversations.  Sen Schumer adds teeth to the Leahy-Lee bill via Schumer (Senate 866).
I am a huge fan of the Cornyn-Grassley bill as it clearly covers most of my desired outcomes. Passed independently, either the Leahy or the Cornyn-Grassley bill would resolve a lot.  If Leahy-Lee-Cornyn-Grassley-Schumer got married into a single bill, our work today would be very productive.
I left DC with that hope, and plan to remain engaged with the Iowa Senators. The fitting end to the day was flying along side with Iowa Attorney General Tom Miller and being able to thank him on his action on this issue.