This off today’s news stories – FCC poised to changes in net neutrality policy
The lobbies, supporters and the FCC continue to make the debate around net neutrality more complex than it really is.  Through the various gyrations, the lobby for media and internet companies has figured out that by removing the immediate costs to us end users, they can take us out of the debate. They’re right – most people you speak with don’t really give a damn about this issue because it won’t cost them a dime…. yet.
I have a simple analogy that I’m sure I’ve heard someplace but can’t recall to properly credit – how would you like the public highways to provide priority to those who can afford to pay for high speed driving privilege down the left lane. If the left lane gets filled up, the middle lane becomes available to the payor, continually squeezing the ‘public’ to the right lane, shoulder, and ultimately off the road. It really is that simple in networking terms also.
If you’d like to read my reasoning why – read further.  If not, think about your commute this morning and imagine the above scenario.
The news out of FCC this morning hints at rules allowing a Netflix or Apple to pay for better, faster connections to the Internet for better delivery of video. The way it actually happens in Internet hardware is that, in addition to a fatter pipe to the Internet, Netflix is provided a higher Quality of Service that gives a priority to its traffic, through networking gear, over others’ on the pipe.  Our corporate networks implement such a priority where telephone traffic is generally given higher priority than someone browsing social networks.  Extend this analogy for a moment – 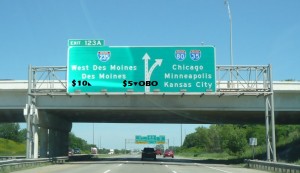 You are entering a freeway and the on-ramp checks your license plate. The freeway computer recognizes that you are a standard driver, checks current traffic, and gives you access and you start driving merrily.  A convoy of trucks enters the highway and they happen to pay 10 bucks a truck. Their priority is, therefore, set higher and the highway computer moves your car off any lanes needed by the trucks until they have passed. On the Internet today, it is reality that lanes are so busy that the entity using it as a public infrastructure will be moved off-road (network term: squelched).
We enjoy Netflix, Amazon VOD, Hulu, Youtube, Vimeo, and many other services because the Internet was setup as a public utility without being called one. No one entity had more rights over the other. It isn’t a libertarian concept to seek to keep it that way. Just like our public highways, our common airspace, our electric supply, phone lines, and access to fire department or police, our Internet needs to remain a public utility, devoid of favoritism.
Netflix, Amazon, Hulu, Youtube, Vimeo were all startups once. And there will be startups again. Will they get squelched because NBC and Comcast chose to pay for higher QoS and eliminate the potential for competition. Bet your bottom $ they will.
Your senators and representatives need to hear. Your newspaper needs to hear. And ultimately, people fighting this fight need support. Head on over to Freepress and the EFF. Join their work, support their work, and more importantly, spread the word about their work. They’ve made it as simple as a button click.

This article appeared in January 19, 2014 issue of the Des Moines Register’s Business section. It is encapsulated here and the original article is here to discuss my opinion on the recent Net Neutrality ruling by the DC Court of Appeals.
————————————————————————————————————————————————————-
Like many homes, Internet services enter mine via cable connected to a Mediacom box. It’s the same cable that provides me with telephone and video service.
But these services’ similarities, according to the U.S. Court of Appeals, ends there. Even though many of us use the Internet to communicate through text messages, email, Facebook, etc., the court says it is an information service and telephone and video services are communications services.
The distinction is important because Tuesday the court struck down FCC regulation of the Internet on the grounds that the regulatory body cannot control information services.
The D.C. court’s action now opens the way for an Internet provider to selectively block content from whomever they choose. If Mediacom doesn’t like the broadcast network ABC providing access to free streaming shows from the network’s website, they can simply not provide consent (try streaming the recent “Modern Family” episode from ABC, if you’d like to try today). The great firewall of China has come to the U.S., and here it will be controlled by AT&T, Comcast, Verizon and Mediacom.
Our government, using the intelligence of lobbyists while checking its own at the door, chose to narrow the definition of communication service in the early 2000s, and despite promises, didn’t fully define the Internet as a communication service during the past five years. The largely impotent Congress, despite constant communication from the masses, remained mired in its own battles. It neither gave the FCC direction to define the Internet as a communication service, nor did it require its chairpersons to act.
You, the readers of this newspaper, still have a little power to act. Our six representatives to Congress need to be reminded by all of you to keep the Internet free of corporate interests. The president needs to be reminded that his promise to reverse the previous administration’s mistake is still not fulfilled. And organizations fighting for your open and free access need your support — monetary and through the power of signatures on the petitions.
————————————————————————————————————————————————————-
The organizations needing your support are the Electronic Frontier Foundation and FreePress.net